Prescription only diet pills, Rimonabant – more commonly known as Acomplia, have been removed from the shelves of stockists.

Acomplia was only available via a visit to a GP or doctor and under prescription and on its introduction was seen by many healthcare professionals at the anti obesity drug of the future.

Over the last two years an estimated 100,000 UK dieters have used the weight loss drug but latest evidence suggests that the possible health risks associated with Acomplia outweight its potential benefit.

Side Effects And Health Risks Of Acomplia

We have already reviewed and commented on the potential side effects associated  with Acomplia Rimonabant.

Acomplia it was though can cause a whole host of health problems ranging from the physical symptoms such as nausea, tendonities and stomach cramps – to more serious psychiatric disorders such as panic attacks to memory loss.

It is now thought that Acomplia may have been the cause of several deaths including a possible suicide.

Acomplia is only prescribed to the extremely overweight of dangerously obese. Mid 2008 the NHS gave approval of Acomplia to used as a last resort anti obesity drug.

How Does Acomplia Work

Acomplia Rimonabant is an appetite suppressant that works by creating a feeling a fullness for the dieter so that food is not craved so much. The theory is that if the brain does not crave for food the body will not take on more calories than it needs – so after time, food portions become reduce and the stomach shrinks.

Appetite suppressants are effective but some of the pharmaceutical drug class diet pills are incredibly strong and can cause more problems than they solve. More about Appetite Suppressants

The dilimma now for the manufacturers of Acomplia – French firm Sanofi-Aventis is what to do in the interim. Bad press will obviously harm profits. A possible solution could be to produce a lower strength version of Rimonabant and possible market under a different brand.

Of the available prescription diet pills, Acomplia has approximately one tenth of the UK market. The most popular and widely prescribed diet pill is Orlistat – brand name Xenical. Xenical is not an appetite suppressant, Xenical works by blocking fat from being absorbed by the body. More about Xenical

Xenical is relatively side effect free – there are one or two side effects that are well documented but these are a minor irritation that anything sinister.

It is interesting to note that Xenical has almost a decade of working clinical trials wheras Acomplia has just the two.

Like Acomplia, Xenical is not available to purchase and only prescribed to the overweight. Typically if your BMI (Body Mass Index) is in the mid 30’s you are considered overweight bordering on obese. Check your BMI

Maybe if drug companies were not in such as rush to get their products out into the market the consumer and the drug company would benefit more in the long term. 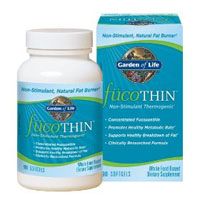 FucoTHIN is the diet pill with the unfortunate sounding name that claims to be the number 1 diet pill in the natural health product industry. This is a claim made many others and usually not substantiated.

So is FucoTHIN number 1 – it is certainly not number in terms of best selling diet pill where the UK consumer is concerned, that titles is reserved for Lipobind

FucoTHIN is targeted toward a US audience and may prove problematic for a UK consumer to buy.

Concentrated Fucoxanthin – which is a type of seaweed combined with pomegranate seed oil, for a patent-pending formula that is naturally thermogenic. Thermogenesis is the process by which the body increases its metabolic rate, requiring utilization of internal stores of energy, such as fat.

Which sounds great in theory but in reality FucoTHIN is just a fat burner – a large majority of fat burners either do not work or can cause side effects.

Side Effects Caused By FucoTHIN

May cause allergic reaction such as hives – but has not shown to date any of the usual treatment effects normally associated with burners that increase the metabolic rate such as anxiety, restlessness and the jitters.

The positive success stories and testimonials on the FucoTHIN website are plenty – else where the reviews are a little less flattering.

Not for a UK or European consumer – the product ships to the USA and Canada. Outside of these two countries a premium is payed for delivery. Refunds (should you need one could be a logistic nightmare)

As for the product itself the clinical studies and trials that were supposed to have taken place did so anonymously. Research is only as trustworthy as the organisations that carry out the studies.

If you are seriously overweight and have a high BMI – you may be eligible for a prescribed diet pill. Click here to read about Prescription Diet Pills

If you struggle to control what you eat, an appetite suppressant may prove more beneficial. Suppressing appetite and reducing food portions is the oldest and most widely practiced method of weight management. Click here to read about Appetite Suppressants

Dietrim prefers to low key and understated marketing tactic. A distinct lack of the weight loss wow factor is apparent although the tag line A Revolution in Weight Loss Management is overused.

Dietrim is one of a number of an advanced new breed of supplements aimed at maintaining the body’s optimum composition.

Dietrim does this by providing nutrients and minerals – including CLA (Conjugated Linoleic Acid). If taken on a regular basis. This could help the body’s own metabolism to achieve a better balance between body fat and lean muscle.

According to the official website Dietrim is based on nutritional science. Dietrim diet pills or capsules have been developed by the worlds leading nutritionists and health advisers in the knowledge that certain nutrients and minerals can form an important role in metabolism.

The Official website goes on to explain that Dietrim has been carefully formulated to work in conjunction  with the body’s own natural processes. It is the most advanced supplement available for those looking to achieve a healthier body shape.

Should not cause serious side effects. It is advisable to read the usage instructions before starting a course.

Those looking for all an round health supplement shouldn’t be disappointed – but those with just weight loss in mind would be better advised choosing a product that is more geared toward fat blocking, fat binding and suppressing appetite.

Hoodia Gordonii – a natural appetite suppressant that can drastically reduce your cravings for food. Reducing the quantity of food consumed has a major bearing on your weight in the weeks and months to come. Read about Hoodia Gordonii