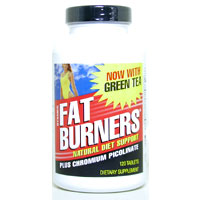 One of the most popular diet pills to buy without prescription is the fat burner – or fat burning diet pill.

The concept sounds effective – a slimming pill that will burn or melt away excess body fat. The marketers of fat burners target the emotions of the overweight with headlines and soundbites such as “Your fat will simply melt away” and “Fat Loss in 48 Hours” – the truth of the matter is the only pounds you are likely to lose are folded and reside in your purse or wallet.

A few years ago fat burner diet pills were based around Ephedra, a substance that was effective for reducing body fat and used in the so called performance enhancing drugs that athletes and sports men and women have on occasions found too tempting to resist.

Ephedra is now a banned substance – the FDA has concluded that Ephedra may not be used in any diet pill, dietary supplement or weight loss product. The reason for this is not based around politics or commercial interest, quite the opposite – Ephedra can produce side effects from the minor irritation to the severe. Several deaths were linked to Ephedra based diet pills.

Ephedra can still be bought over the internet – it is highly advised not to do so. The black market will always find away.

When all is said and done Ephedra is still a fat burner – fat burners treat the result of too much over indulgence. Most fat burners use, within their formula high caffeine content amongst other ingredients that raise the metabolic rate and increase the heart rate.

The methodology behind the fat burner is to bring the body to a state whereby it can cause its own weight loss – how do you feel after drinking several cups in quick succession. The effect of the fat burner can cause the heart rate to rise and cause restlessness or the a jittering feeling. Without the resluting action of the body in motion or exercing the fat burner doesn’t actually cause any weight loss effect.

It could be argued that caffeine alone will the same effect as a fat burning diet pills.

The diet pill genre that is proven to be more effective are the preventative products rather than the curing.

Fat Blocking and Fat Binding are preventative measures that will not only aid in the reduction of fat but also satnd the body in good stead of actually reducing body fat permanently.

The result of this is obvious – without changing your dietary habits you are only taking on three quarters of the fat from the food you consume.

The most commonly prescribed diet pill that utilises the fat blocking technique is Xenical – Xenical is prescription only and only availble on prescription. Do not buy Xenical – obtain only via GP consultation and for the price of a prescription. More about Xenical here

Proactol is a non prescription alternative that utilises the fat binding technique. Proactol is certified medical device type 1 and is classified as MDD 93/42/ECC under MHRA guidlines. More about Proactol here